Future applications of robotics require the systems to operate in complex and unstructured environments such as homes. To operate in environments built for humans, robots need to possess human-like capabilities in areas such as perception, manipulation, and reasoning. In addition, the robots also need to be able to interact with people in a collaborative fashion.

The focus of Intelligent Robotics group is on methods that allow a robotic system to cope with imperfect knowledge and uncertain senses. Since many of our methods are general purpose, we have demonstrated results across a variety of application areas from industrial robotics to domestic service robots, from field robotics to autonomous driving. 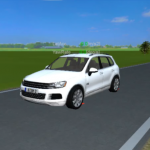 Driverless cars and autonomous driving have shown major progress recently with the use of machine learning to learn driving behaviors from human demonstrations. However, the uptake of these is still limited, especially since the safety of such data-driven solutions is difficult to guarantee or even assess. Our work in autonomous driving targets the question how […]

Biological systems may serve as an inspiration for robots. Nature can provide inspiration to the designs of physical components such as sensors and actuators, as well as computational processes such as perception or decision making. What we do Tactile sensing inspired by both morphology and operation of rat whiskers; Study of human navigation behavior to […] 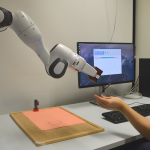 Service and collaborative robots are becoming more common in dynamic human inhabited environments. Robots have potentially a wide range of capabilities, making them the perfect candidates for the role of general assistive devices. To be fully effective, robots must adapt to their end users’ needs. Users, however, may lack the technical skills to properly instruct […] 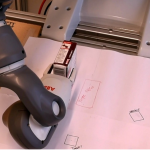 Robotic grasping has been studied for more than 30 years as it is an essential skill for both industrial and service robots. Most grasp generation methods rely on known objects and a static environment with no clutter, assumptions which are not applicable in more dynamic environments such as homes. In these environments robots need to […] 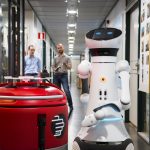 For any mobile robotic platform, the ability to navigate its environment is important. Avoiding dangerous situations such as collisions and unsafe conditions is a crucial capability to achieve autonomy. Moreover, robots need to maintain a representation of their environment in order to properly operate inside it; this is achieved through maps, often built by the […] 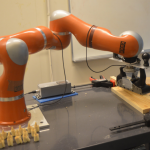 Robotic tasks in real-world applications generally involve uncertain, stochastic and dynamic environments. Pre-programming based solutions either do not work or give unsatisfactory results in such environments. This requires to generate cautious control strategies that provide optimum actions to perform the desired task while considering the effects of the uncertainties in the environment. Robot control aims […] 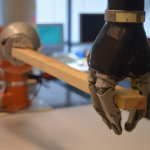 Programming robots to perform various tasks often requires extensive domain knowledge and a tedious programming process. The size of the program rapidly grows with task complexity; explicitly programming a robot to perform challenging tasks in a variety of environments would require the programmer to write routines for an enormous number of situations that may possibly […] 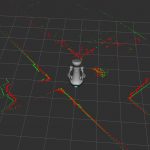 Robots’ ability to interact with their surroundings is an essential capability, especially in unstructured human-inhabited environments. The knowledge of such an environment is usually obtained through sensors. The study of acquiring knowledge from sensor data is called robotic perception. Perception is the first step in many tasks such as manipulation or human-robot interaction.